The Men’s section is very active and has many competitive opportunities both internally and externally.

Sunday mornings are the largest gathering of the men’s section with a regular weekly competition throughout the summer months. These are traditionally a shotgun start (everybody starts at the same time from different tees) this means everybody finishes at the same time and then meets in the clubhouse to swap stories, have a drink and receive prizes.

The club captain will also issue out humorous fines with all proceeds going towards his chosen charity.  Signing up to play is a simple call or email to the Club office. If it is your first Sunday please let the office know and they will start you off with an established player who will show you the ropes. In the winter months the section runs a pairs winter league.

Although the Sunday mornings are a big part of the week, we like to feel that we offer a complete 7 day experience for our members.  All throughout the main golfing season there will be weekly competitions for all to enter as well as established group roll-ups who are always on the look out for new competitors.

The Saturday gang are a relaxed bunch that welcome all new golfers to the group. They tee off between 7.30 and 8.30 and have a really good mix of playing abilities and characters! The emphasis is on enjoying each others company and having fun on the course. They all have affectionate nicknames so you could end up playing with the ‘Hustler’ an ‘Entertainer’, a ‘Comedian’, a ‘Rules Official’, a ‘Swinger’, a ‘Bank Manager’, a ‘Grinder’, a ‘Sex Symbol’ or the obligatory Bandit!

The group play a good mix of Stableford and Medal competitions throughout the year and play for such prestigious trophies as the Cardy Cup and The Inflatable!

The age range is diverse with players ranging form 30 to 80 years young.

To quote one member ‘ We love our Saturday get together like those days at school on a windy autumn day eager for playtime and that dash to the horse chestnut tree to grab the biggest conker!’

Come along and give this group a try.

Most weeks during the season the club take part in friendly matches home and away against other local clubs, keep an eye on the notice boards in the club house for details of how to enter.

The club plays in a midweek evening league during the summer months against the other clubs in the New Forest. It is known as the Monty League and is a Foursomes format. 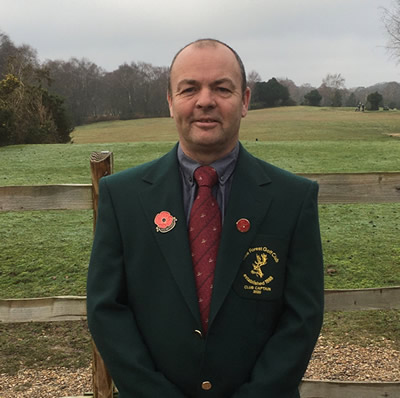 Firstly, I’d like to thank Richard Holland for affording me this honour and for asking me to become his Vice Captain, thank you Richard and thanks to you all for electing me as your Club Captain.

I would like to wish Ian Coundon and Lesley Lloyd a successful year in their captaincies. Also, our President Graham Lloyd and Ladies President Shirley Preston. I hope you have a great year. Thanks also to go to John Ledger, Emma and Fiona in the office, Ricky Jeal and Sarah for all the hard work in organising social events and, behind the scenes work that keeps this great club going. And, thanks to all committee members and members who put in their time to help run the Club for us all.

I would also like to mention the Greenkeepers who often don’t get the credit they deserve, the course has been kept in great condition this year and continues to get better! To Steve Duckett for his work on the new tees, they are starting to look great. Thank you, Ian, John and Steve.

There’s not much to say about me, most of you know me but for those who don’t, I have been a member for 25 years after being introduced to the Club by my late dad (Jim) and my brother Gary, who I will be relying on for plenty of lifts to Club matches, as you know I do like a drink or two.

My charity for this year will be for the diabetes team at Southampton General Hospital and I would also like to put some back into the Club.

My Vice Captain this year will be Mr Gordy Dale. Hopefully we will be able to support each other in what I hope will be a great year.

Lastly, I would just like us all to raise a glass to our late Chairman Eddie Spencer and to Past President Alec Grassick and to all members who have passed on this year.

If you would like to get involved in joining the committee for future years then please get in contact.