Teams who qualified for the knockout rounds highlighted in yellow. Third position in Division B was determined by a closely fought playoff between Worsley/Burn and Holland/Gay which was decided on the 18th hole. 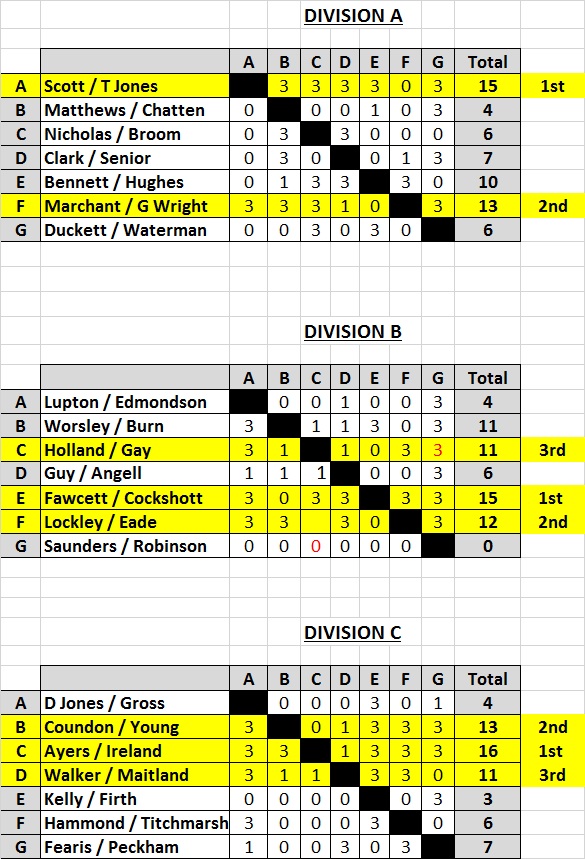 The winning team of each match is highlighted in yellow. The semi-finals were played on 28th April and the final on the 23rd May. 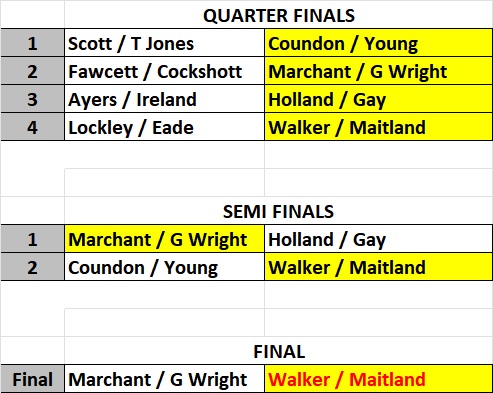 The weather was cool, the sky overcast as the two pairs of finalists assembled on the first tee. 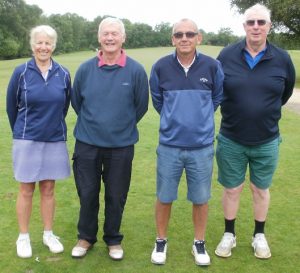 This was the culmination of a series of 70 matches that began 6 months ago when 21 pairs across 3 divisions began this competition. These pairs had each played 8 of those matches to qualify for this final. There was little to choose between the two teams with Gill, Hugh and Phil all playing off 17, Harry the only one to get 3 shots playing off 20.

Phil and Harry won the toss and chose to play first. Their drives flew straight and true as did Gill’s, however Hugh hooked his into trouble down on the left which did not augur well. When Phil put his second shot close to the pin it was clear that it would be quite a struggle. Somewhat predictably Phil and Harry were one up moving onto the 2nd tee.

Gill managed to stop that rot by halving the 2nd and Hugh did the same with the 3rd. Things appeared to be looking up for Gill&Hugh as they both were very close to 4th green in 2 while Phil and Harry were in difficulties. However Harry, after only just scrambling out of one of the bunkers on the right suddenly sunk a 20 foot putt from off the green for a 4 turning what had been expected to be an easy win for Gill&Hugh into a very nervy half!

Hole 5 went Harry&Phil’s way making them 2 up, but the tables were turned somewhat on the sixth when out of the blue Hugh, who had ended up below the green on the left with a difficult shot over a bunker, ended up sinking a 15 foot putt to win the hole and bring the score back to one. Gill halved the 7th with a well struck putt with Hugh close behind despite having put his drive into the ditch along the right hand side of the fairway. The 8th became a bit of a scramble with Hugh leaving putts short and turning a possible win into yet another half. The 9th was halved by Gill leaving Phil&Harry one up at the turn.

Gill evened the score by winning the 10th but Harry’s demon putter won him the 11th to restore their lead. The 12th and 13th were both halved with very good putting on both sides. The 14th and 15th ended in honourable halves. Gill played extremely well to halve the 16th and the 17th so with one hole to play the score stood at Phil&Harry one up.

Desperate for a win on the last hole, Hugh was faced with an 8ft putt to force the match to go into sudden death playoff. Sadly his putt missed the hole by inches (but at least it wasn’t short) and so Phil and Harry took the match by just one hole to claim the MICK WHEELER WINTER LEAGUE TROPHY. 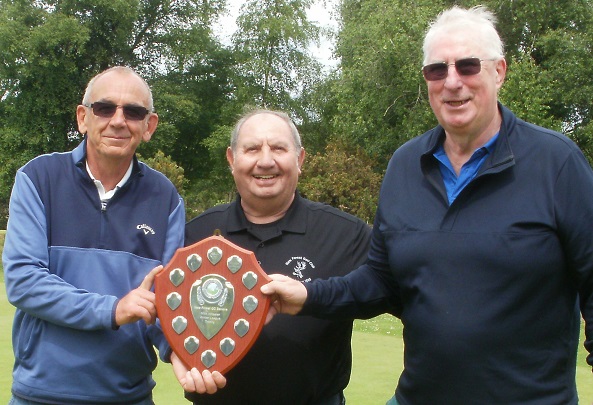 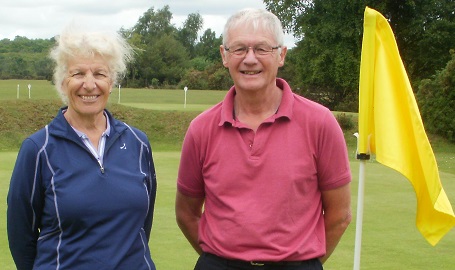 Much of the match was closely followed by Seniors Captain Barry Nicholas from various places of safety behind trees. It was a little like playing “Where’s Wally” trying to decide where he would pop up next! Little did he know that the safest place would often be in the middle of the fairway!

Full results of this year’s other competitions